Emulsification is the distribution (or dispersion) of one incompatible liquid within another. Emulsification undergoes a process of dispersing one liquid (containing the bioactive compounds) in a second immiscible liquid, by applying electrostatic, or hydrophobic, or hydrogen bonding interactions between the bioactive compounds and an encapsulating material. In the absence of a surfactant or an emulsifier the two liquids would quickly separate when mixed. The addition of a suitable surfactant reduces the interfacial tension and prevents the separation of the dispersed droplets by acting at the liquid/liquid interface.

Dispersion usually refers to the distribution of an insoluble solid, for example a powder, in a liquid.
In the case of a solid dispersing in a liquid, dispersion is a process by which agglomerated particles are separated from each other and a new interface between the inner surface of the liquid dispersion medium and the surface of the dispersed particles is generated. In the absence of a surfactant, the powder would quickly separate again after mixing. With the addition of an appropriate surfactant the powder will remain dispersed within the liquid. The surfactant reduces the interfacial tension of the liquid and prevents the dispersed particles separating.

Emulsions and dispersions are stable and do not separate into two layers: 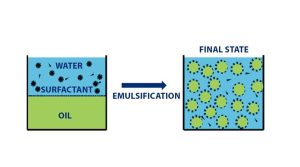 The purpose of emulsions and dispersions…

Emulsions and dispersions allow the production of many familiar products. Without the use of surfactants such as emulsifiers and dispersants, products such as paints and creams would separate into their different phases, thus making them unusable.

At Libra Speciality Chemicals, our range of surfactants possess exceptional emulsification and dispersion abilities, making them suitable for a variety of uses. Libranox amine oxides are one of our popular surfactant ranges for emulsification and dispersion abilities. When applied to cleaning products, they perform as excellent detergents, as well as providing excellent foam boosting and foam stabilising properties.

Amine oxide is a chemical compound that contains the functional group R3N+−O−, an N−O with three additional hydrogen and/or hydrocarbon side chains attached to N. Amine oxide acts as a non-ionic surfactant in neutral and alkaline pH and cationic in acidic conditions and is compatible with most other surfactants. Importantly, Libranox amine oxide products are compatible with most surfactants. Evidence shows that they can even exhibit synergistic effects when combined with anionic and other non-ionic surfactants. For example, when used in combination with anionic sodium lauryl ether sulphate (SLES) they are proven to give an increased detergency effect. They do not hydrolyse in strongly acidic or alkaline systems, are often used to provide viscosity and strong cleaning powers (grease emulsification and soil suspension), and are extensively used with both sodium hypochlorite and hydrogen peroxide to produce bleach-based products. The series produces a dense, stable foam which can be used in the formulation of high alkalinity cleaning compounds. They are used in industrial cleaning and once they are sprayed on to contaminated equipment the amine oxide allows for excellent adhesion to the surface, providing an extended dwell time for cleaning.

For more information about Emulsification & Dispersion, or any of our quality products that we offer please visit our website or get in touch with a member of our team.